How does leaky gut affect autoimmune?

There is no single element that causes autoimmune disease – not your genetics, not your toxin exposure, not lifestyle factors. It is the critical mass of many factors that causes your boat to capsize. Symptoms are simply the feedback from the instrument panel that is “your body” – that’s all.

If you medicate it (self-medicate with food, alcohol, shopping, over-the-counter, and/or prescription drugs), ignore it, judge it, criticize it, the body gets louder over time. The symptoms worsen as the imbalances move deeper into your tissues, cells, organs – that’s it.

The unfortunate part is that most of us have not been taught this at the onset of our symptoms, ending up then with a full-blown autoimmune disease and still all too often not being told this at the point of a diagnosis.

With the help of the Standard American Medical model (SAM, Uncle SAM) + the relationship between the insurance industry and the pharmaceutical industry, and fear thinking we create a story about our body, often criticizing it, blaming ourselves or our genetic inheritance, we follow doctor’s orders rather than listening to our own body, and seeking help with root cause resolution.

What is leaky gut?

Inside your belly, you have an extensive intestinal wall, a lining covering more than 4,000 square feet of surface area. When the environment is rich and working properly, it forms a tight barrier that controls what gets absorbed into your bloodstream. An unhealthy or leaky gut, what I call a bankrupt gut may have large cracks or holes, allowing partially digested food, toxins, and bad bugs to penetrate the tissues beneath it. This triggers inflammation and changes to your gut flora (the normal bacteria meant to be in there) that often leads to digestive difficulties and problems within the digestive tract and well beyond. 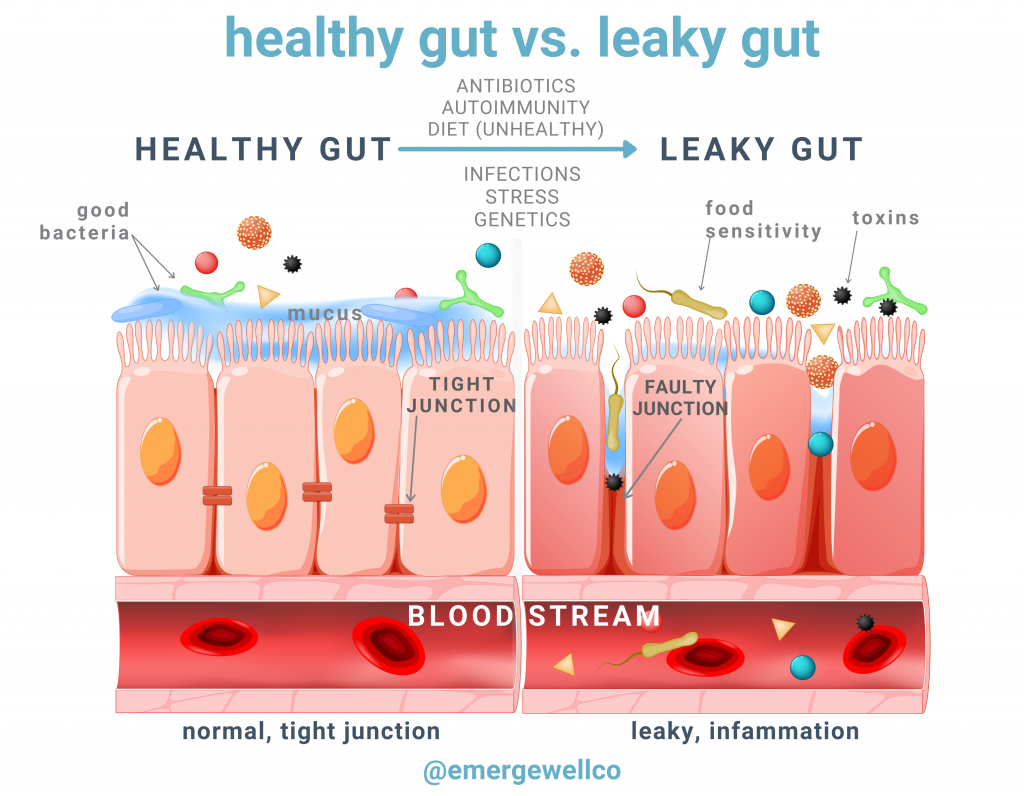 We all have some degree of leaky gut because the barrier is not completely impenetrable, and it’s not supposed to be! While some of us may have a genetic predisposition, meaning we may be more sensitive to changes in the digestive system, our DNA is not the only one to blame – modern living may be the main driver today of gut inflammation and increased intestinal permeability. The emerging scientific evidence is showing that the Standard American Diet (SAD), which is low in fiber and full of sugar and saturated fats, is a leading culprit in initiated leaky gut.

We already know that this increased permeability (aka leaky gut) plays a role in autoimmune diseases.

Once you have received an autoimmune diagnosis, you can’t get your “old life back.” It’s never possible to go back. You can, however, create a better future!

Today I know that my autoimmune disease had been developing for many years. Tracing back the trail of causal factors, traversing the terrain of my own autoimmune story, a decade-plus passed – I’d had several unexplainable episodes of severe pain, vomiting, low blood pressure, and even passing out upon eating so-called “healthy foods; I was hospitalized and diagnosed with a rare portal vein thrombosis (aka a malfunctioning liver), prescribed Adderall for an inability to focus and brain changes that I called “adult-onset ADD,” and gone from an energetic entrepreneur teaching group fitness for fun at 5 am, running marathons with friends, traveling with my hottie husband, to dragging myself from point A to point B.

Mentally I began feeling defeated, believing that my body was the one betraying me. I expected that if I just worked out hard, ran marathons, ate a diet better than the Standard American Diet (SAD), and went to bed on time, I would never get sick.

And while I’d learned early in life not to ever let anyone see me as anything other than a high achieving, “in control” kind of gal, capable of navigating whatever life (and the people in it) threw at me, it was early in 2017 that I was emotionally bankrupt as I learned the truth – I had entered a joint venture business partnership with a man who not only lied, leading me into a charade but so much more than we have time or space for here. The worst part is that I never saw it coming. I had trusted him at his words and that which we put into writing. Then when he suddenly died, he left me to fight his wealthy estate and protect everything I had worked so hard for, personally, professionally, and in a relationship with my one true partner – my husband, Joe.

This truth shattered the premise that I had built my life on – work hard, be kind, take action, tell the truth, and you’ll do well in the world. I was grieving, but I didn’t have the vocabulary to express it at that time, nor did I know how to let grief and anger in without being consumed by it. So, I didn’t. Instead, I ran another marathon, took on a substantial fund-raising project with short timelines and high visibility, winning the title of Fort Worth Woman of the Year, and recording a record-breaking year in business.

He had betrayed me and the business. I was betraying my body by continuing to step over the psychological abuse this relationship represented, loading on more achievements, and binge eating sugary goodies, all because I wanted to feel something other than anger, shame, and disgust for the whole damn thing.

It may sound odd, weird, or even funny (and if it does, so be it), but learning I had Addison’s put everything into perspective. And while my body was ailing in ways I could never have imagined, my determination to live and live well was more straightforward than ever. I would not allow this relationship to take another thing from me, my family, or my financial future. In the process, I would fight for my health and protect my family, putting an end to a treacherous tale of joint-venture partnership.

This is when I would learn that autoimmunity from an Aryuvedic perspective is undigested anger. Functional medicine (which took the precepts of Aryuvedic medicine and translated them into western language for the western traveler) knows that the root of wellness and illness is in the digestive tract.

As we continue to traverse the terrain that contributes to autoimmune disease, genetics, and environmental toxins, the gut is next in line.

A rich gut – let us peek into the process! (or bypass the process, and potentially go straight to a bankrupt body)

Unless you have reoccurring stomach issues, you probably don’t think much about your gut or digestion. The kale, cake, corn, cookies, whatever you eat, goes in one end, and then comes out the other in 24-36 hours – or at least that is how it is supposed to go – that’s how you are supposed to go.

A Path to Leaky Gut: 10 Things that Destroy Your Gut

Now that you understand the inner-workings of the digestive tract, below is a list of 10 things that destroy your gut and eventually cause “leaky gut”. Reflect and see if any of these could potentially be causing your gut issues:

Accessible ways to immediately start healing your gut, you could begin with doing these 3 things:

I invite you to join us at our upcoming Tea & Talk where we will be discussing Autoimmune, genetics, toxins and gut health. Click here to sign up: https://emergewellco.com/upcoming-events/

shop our favorite products and brands to support your wellbeing

designed to build health and revitalize high-functioning women like you

tips to emerge well sent right to your inbox